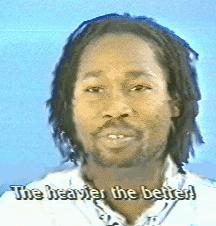 The video "THE HUMAN BODY: Appearance, Shape, and Self-Image" is about the meaning, importance, and variety of the bodies we inhabit. The video examines 12 different facets of the human body that impact our preferences, our ideals, our attitudes, and -- perhaps most important -- our self-images.

Some of the subjects explored in THE HUMAN BODY include bulimia, anorexia, tattooing, branding, plastic surgery, scarification, body prejudice and "weightism," the impact of "super-models" and beauty contests on the self-images of young women, the effects of aging, and cultural differences in ideas about who is beautiful. In each case, the power, subtlety, and significance of the body is explored. Using the powerful evidence of their own lives, the people in THE HUMAN BODY demonstrate how each of us is dramatically affected by the strong attitudes, preferences, and feelings we have about our own body.

One way that people express themselves is with body art--tattooing and branding are examples. In THE HUMAN BODY, the man on the left describes the elaborate tattoo he designed for his back, and the man on the right explains how his arm was permanently "branded" when he joined a fraternity.

In THE HUMAN BODY, we see people discuss the symbolic meaning of the tattoos, brands, piercings, and scarifications they have chosen. We also see a tattoo artist discussing the difference between casual and "collector" customers, and also hear the artist's description of the kinds of tattoos he regards as unethical--such as racist or "hate" tattoos. A young woman discusses prejudice against her "gang" tattoos and her desire to have them removed.

In Western societies, at least, there appears to be widespread dissatisfaction with one's own body. Plastic surgeons cater to this discontent. In the U.S. alone, there are an estimated 750,000 cosmetic surgery procedures annually. The most frequent cosmetic procedures for women are (in order): liposuction, breast augmentation and collagen injections. For men, the most common procedures are nose reshaping, eyelid surgery, and liposuction.

In THE HUMAN BODY video, we meet a woman who has had a breast augmentation, and a sociologist who has done research on plastic surgery patients. We meet an experienced plastic surgeon, and we also hear spirited criticism of the entire field of cosmetic surgery.

Where do images of the "perfect" body come from? During the last century, the image of bodily perfection in Western nations has grown progressively thinner. This seems particularly true for women. Current female models are tall, extremely thin, and also large-breasted--and this combination is so rare as to be nearly impossible for most women. What effect does this have on young women? In THE HUMAN BODY, we meet famous "Super-Model" Rebecca Romijn, and she discusses modeling and the impact that ultra-thin models are likely to have on young women.

We also meet Ann Simonton, a former "cover girl" model. Now an outspoken critic of the negative effects of modeling and beauty pageants, Simonton believes these images harm young women and create eating disorders. In THE HUMAN BODY, we see critic Simonton dressed as "Miss Steak"--she wears a dress made of real meat to symbolize her view that beauty pageants treat women like livestock at a cattle auction. 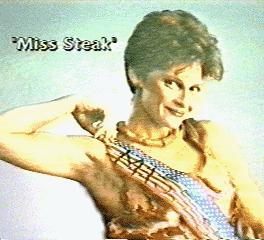 Long after prejudice about religious, ethnic, and racial groups has become socially unacceptable, the overweight are still openly ridiculed and insulted. It may be that "weightism" is the last socially acceptable prejudice. In THE HUMAN BODY, we meet people who have experienced cruelty and humiliation solely because of their size. These public embarrassments are common for larger people and, as the experience of the woman below makes clear, the pain is unforgettable. 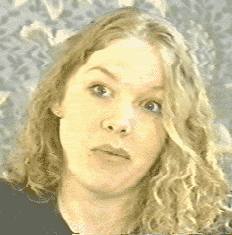 How much of the preference for thinness is universal, and how much is an arbitrary creation of contemporary Western society? In THE HUMAN BODY, we meet a man from the Ivory Coast who describes a very different beauty standard, one summarized by the saying "The Bigger, the Better." In the Ivory Coast, we learn, women approaching marriage are placed on diets designed to INCREASE their weight so they will be "Big and Beautiful" to meet the larger beauty standard of that culture.

As the video THE HUMAN BODY demonstrates, our bodies carry enormous significance--for others, and also for ourselves. Preferences and prejudices about the body can lead us to attempt dramatic--but not always wise--alterations of what we look like. Images of the "ideal" body vary dramatically across cultures, and also over time. This means that current images of the "ideal body" reflect arbitrary preferences--and not universal, timeless standards of beauty.

In THE HUMAN BODY, we encounter unforgettable people. Using vivid evidence from their own lives, these people demonstrate that the body powerfully affects our sense of who we are and, just as important, who we want to be.